Beethoven in Love
a new book by David Ryback

“You’ll never hear Beethoven the same after reading this.”

“What you have written … is marvelous, enticing! This will be a best-seller, a movie.”

“Finally – an engaging and powerful story about Beethoven that reveals his inner soul and the love that changed his life! You’ll never hear Beethoven the same after reading this.”

“Reading David Ryback’s inventive story is to embrace artistic brilliance. Ingenuously written, it effortlessly transported me to Beethoven’s final days; so much so, that at times it seemed as if the maestro was in the room, struggling from his death bed to the piano, and then mesmerizing us as his fingers danced across the keys. Scene-setting and dialogue are superb; the story captivating.”

Jedwin Smith, author of Let’s Get It On,
Fatal Treasure, and Our Brother’s Keeper 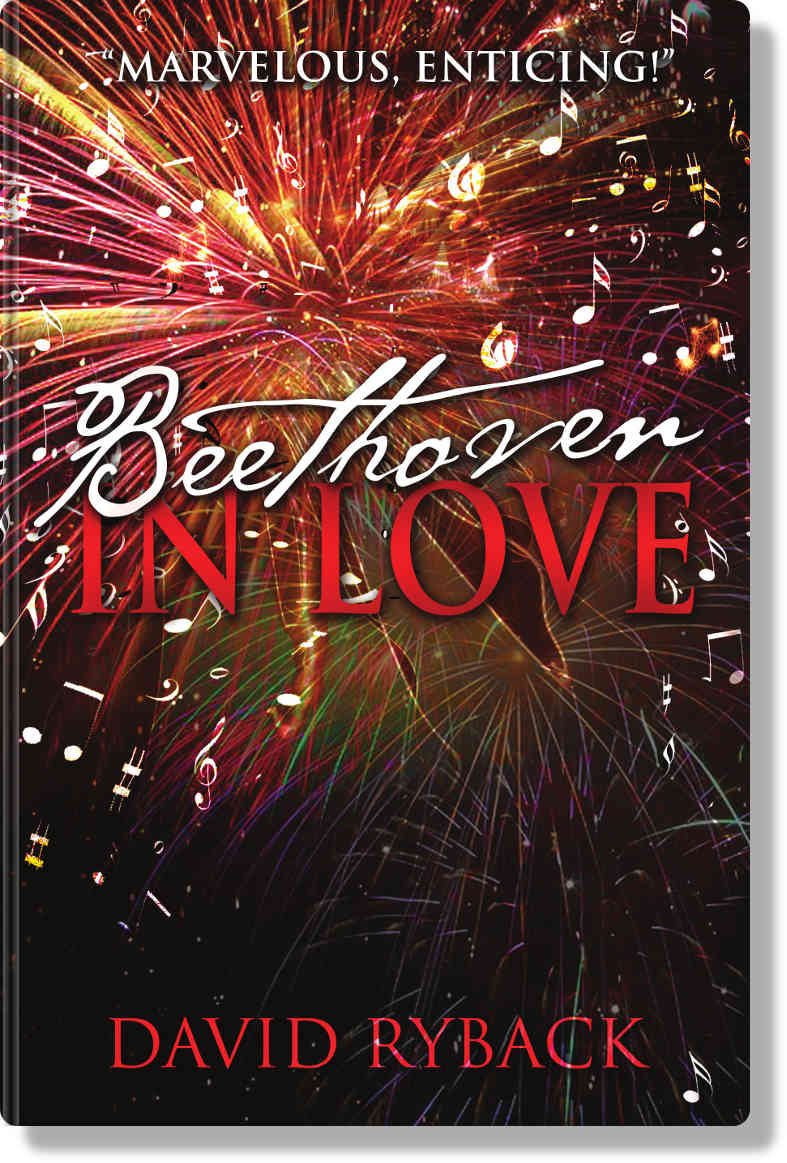 “Music,” Shakespeare is reputed to have written, “hath charms to soothe the savage breast.” But he never heard the works of Beethoven, which could do just the opposite – incite passions, of all varieties, in the hearts of gentle folks. Yet, apart from his music, Beethoven had little passion in his own life until he met the woman he referred to as his “Immortal Beloved.” This is the story of what happened when the creator of such powerful music finally met a woman who would turn his world askew, allowing an illicit romance to flair violently within his own soul, transforming his music so that emotion soared in the hearts of all souls who heard it.

Beethoven’s mythic Immortal Beloved has remained a mystery despite the many attempts at uncovering her identity. A careful review of the research points to the married Antonie Brentano as the most likely. At a time when music was being revolutionized, Beethoven was at the center, and his contribution was influenced by this fiery relationship.

Although this novel is not a factual history of Beethoven, it is based on his life, and the major events are accurate – except, of course, for intimate scenes and personal thoughts.

This account of Beethoven’s life may be the first love story of the Romantic Era, since Beethoven pioneered the new movement through his revolutionary approach to music. As the author, I’ve done the research to make this account as accurate as possible without sacrificing the dramatic elements that can be created with poetic license.

As I’ve gotten to know Ludwig van Beethoven better over the decades of researching and writing about him, I’ve felt a strong kinship with him which, to be frank, is what brought us together in the first place. When I saw the film, Amadeus, about Mozart’s life, I felt jealous for Beethoven. What about his story, I wondered.

To me, he is still a living entity, and he entertains me with his magical music not often enough. I sometimes imagine him with me as I make my way through life, explaining to him how cars can travel without horses and how much music has changed since his lifetime. I imagine him responding that he really likes this new jazz and bluegrass, and how his music reached out to those forms within the limited constraints of his era, with his experiments in rhythm and harmony. We could explore how his thirty-second piano sonata was a harbinger of swing music when, in the arietta, there is an impressive 2-minute episode where he switches to a 12-beat rhythm implying an unmistakable back-beat in alternating thirty-second and sixty-fourth notes. Some say, I would tell him, that the major to diminished harmonic change here can be compared to what we now know as the first phrase of Muskrat Ramble. Would that confuse him, I wonder. Or delight him? Muskrat Ramble!”

Then we might down some 1806 Rudesheimer Rhine wine together, and compare it with a modern-day California Cabernet Sauvignon by Mondavi, as we contemplate the challenges of romance, other social relationships in general, and even politics, not to mention the mysteries of religion. So, please join us as we continue this conversation about all these topics, to explore the vagaries of life. Apparently, they haven’t changed that much in two hundred years. Welcome to the world of Ludwig van Beethoven!

Now, go ahead and enjoy this story of the greatest romantic in classical music and the woman who inspired him, despite all social and moral obstacles – altogether a fascinating subject.

(Cue in choral passages of the Ninth Symphony for background as we meet his Immortal Beloved in the opening scene you’re about to read.)